The purpose of this article is to provide awareness of the owner’s duties along with case examples regarding the duty to cooperate and coordinate on multi-prime construction projects. 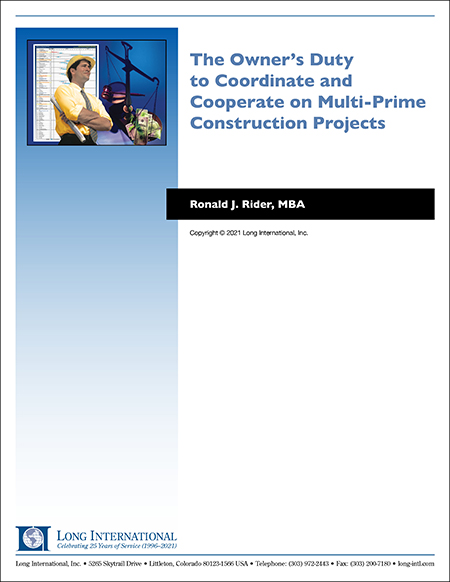 In the construction industry, the owner has the ultimate decision to implement a project delivery program. The project delivery program or method can take many forms. One method utilized by owners is contracting with two or more prime contractors to complete the project. The use of multi-prime contracts can have inherent problems for owners that can directly affect one or several prime contractors. In certain situations, an owner’s actions or inactions may directly or indirectly impact the ability for a contractor to enjoy a least-cost performance. Deficient owner coordination and cooperation is a major problem that can plague multi-prime construction projects. The purpose of this article is to provide awareness of the owner’s duties along with case examples regarding the duty to cooperate and coordinate on multi-prime construction projects.

2.    WHAT ARE MULTI-PRIME CONSTRUCTION PROJECTS?

In addition, multi-prime construction projects are classified into three main types. First, the owner by itself, or through a construction manager, enters into separate contracts with different specialty subcontractors. Second, the owner awards separate contracts for complete phases of the project with each prime contractor responsible for all the work in its phase. Third, the owner breaks up the project site into subprojects due to the size, location, or diversity of the overall project. The owner then contracts with separate general contractors for each subproject. Example projects include the construction of military bases, penal institutions, and housing complexes.

It is axiomatic that the interdependence of the contracting parties in a multi-prime construction project is crucial to the success of the project. Coordination and cooperation, therefore, are vital to the project’s successful completion.

3.    THE DUTY COORDINATE AND COOPERATE

The duty to coordinate and cooperate is implied in every contract. This duty requires the contracting parties to deal fairly in a positive fashion and in good faith. Specifically, a contractor has the right to a least-cost performance of its contract without interference by the owner or the owner’s agents. An owner’s lack of coordination and cooperation can lead to schedule delay and negatively impact a contractor’s least-cost performance. Typically, on a traditional design-bid-construction project, the owner and its engineer monitor the progress of the project, but they assume little or no responsibility for the coordination and performance of the work. In this form of project delivery, the contractor is typically required to coordinate and schedule its scope of work.

A breach of an owner’s implied duty to coordinate or cooperate can entitle a contractor to recover damages under court-recognized entitlements. Examples include differing site conditions, implied warranty, and maladministration entitlements. As required for all disputes, a contractor’s claim for a breach of the owner’s duty to coordinate or cooperate must be supported by facts. Consistent with the requirements of the contract, it is imperative that a contractor provide the owner detailed discussion and explanation including timely notice, demonstrate causation due to the owner’s actions or inactions supported by contemporaneous project records, and provide damage calculations with sufficient backup documentation. The following case examples discuss how contractors were able to recover from breach of an owner’s duty to coordinate or cooperate.

In Pierce Associates, Inc., GSBCA No. 4163, ¶ 12,746 (1977), the Board of Contract Appeals (the “BCA”) found that Pierce Associates, Inc. (“Pierce”) was entitled to an equitable adjustment under the Suspension of Work clause within the contract for delays caused by another prime contractor’s late performance, because the government failed to demand that a slow performing predecessor contractor comply with government’s overall schedule.

The government awarded Pierce with a Phase I mechanical contract for work on the Washington Technical Institute (the “WTI”) facility in Washington, D.C. The government hired a construction manager and utilized a phased construction method of project delivery for Phase I of WTI. Pierce’s work depended on the completion of work by the structural contractor, Piracci Corporation (“Piracci”). Piracci’s progress experienced problems which delayed Pierce.

Pierce tried to mitigate the impact caused by Piracci’s delays by working around Piracci in an attempt to meet its contractual milestone dates. Pierce suffered damages to its least-cost performance due to Piracci’s interference. Pierce was able to recover its increased cost under the Suspension of Work clause which stated the following:

(b) If the performance of all or any part of the work is, for an unreasonable period of time suspended, delayed or interrupted by an act of the Contracting Officer in the administration of this contract, or by his failure to act within the time is specified in this contract (or if no time is specified in within a reasonable time), an adjustment shall be made for any increase in the cost of performance of this contract (excluding profit) necessarily caused by such unreasonable suspension, delay or interruption…

The BCA agreed with Pierce that its contract duration was delayed by an unreasonable amount due to the government’s lack of coordination. The BCA also concluded that the government failed to exercise its right of control over Piracci’s inefficient work.

In Jacobson & Company, Inc., GSBCA No. 5605 ¶ 14,521 (1980), the BCA found that Jacobson & Company, Inc. (“Jacobson”) was entitled to an adjustment to its contract due to the government’s failure to prevent interferences that affected the contractor’s work. The government contracted with Jacobson to perform ceiling work on a phased design and construction of a federal building in Jackson, Mississippi. Jacobson’s work needed to be coordinated with a high-partition contractor who was contracted separately by the government.

We therefore request that the braces and interfering top cap be removed and reinstalled in sequence after our ceiling is completed. Furthermore, we request your change order to compensate us for lost time…

The Government can decide on whatever method of construction and contracting it chooses, but in doing so, it also assumes the responsibilities inherent in its choice. With phased construction, it is obvious that the contracting officer has the obligation and duty to demand that the various contractors cooperate with the construction schedule and not interfere with the work of any other contractor.

Based on BCA’s ruling, Jacobson was entitled to recover increased costs from the government due to the interferences caused by the high-partition contractor.

3.3    CASE EXAMPLE NO. 3 – UNREASONABLE INTERFERENCE BY THE OWNER

Since the project was fast track, Mopac contracted the substructure work in a separate prime contract with Al Johnson Construction Co. (“Johnson”). Elements of Johnson’s work were dependent on ABD’s work, and ABD’s work depended on the timely completion of certain substructure work by Johnson. Johnson’s work encountered unforeseen obstacles which caused repeated revisions and extensions to Johnson’s scheduled completion date. These unforeseen obstacles that impacted Johnson also delayed access and startup of ABD’s work. ABD had made a large number of commitments based on the timing of Mopac’s notice to proceed order. Because ABD was unable to follow through with its large commitments, ABD claimed that it was damaged due to delayed access to the site.

The USCA found that Mopac, by giving notice to proceed to ABD when Mopac knew that delay to Johnson’s work was inevitable, actively interfered with ABD’s ability to maintain a flexible work schedule in the face of Johnson’s difficulties. The USCA declared, in order to find active interference, that the following must be demonstrated:

The BCA held, however, that the government’s exculpatory language did not relieve the government’s responsibility to coordinate the performance and timely completion of various prime contractors. The BCA stated:

However, we have held that even affirmatively exculpatory language such as this does not overcome the Government’s liability under the Suspension of Work clause for unreasonable delays caused by the Government’s failure to coordinate the work of its prime contractors…

Even with this exculpatory language in the contract, the government had a duty to coordinate. Further, the BCA referred an earlier ruling from Pierce Associates, Inc., GSBCA 4163, ¶13,078 (1978), stating the following:

The Government may not give such exculpatory language precedence over the Suspension of Work clause which has been mandated by the Federal Procurement Regulations. Under the terms of its contract, the Government had the responsibility to make all reasonable efforts to keep its other contractors on schedule when the timely performance of one contractor was dependent on that of others. To allow the Government to escape the responsibility imposed upon it by terms of the contract and to deny the Appellant the adjustment cognizable under a relief-granting clause would remove much of the Government’s incentive to properly supervise the progress of a phased construction project.

The BCA found that the government breached its duty to coordinate and ruled in favor of Stephenson Associates.

If the owner or owner’s agents do not practice and provide effective contract administrative control with respect to coordination and cooperation on multi-prime construction projects, then a chaotic work environment can result. Since timely start and completion of specific work packages by one or many prime contractors may dictate the timely start and completion of subsequent prime contractors, delays and disruption issues attributed to poor owner coordination and cooperation can negatively impact the least-cost performance of the successor prime contractors. The resulting domino effect can trigger protracted claims and disputes since the owner has the duty to coordinate and cooperate.